In the late 90s, a website called Temple of CZ created a collection of some 2,000 presets for Casio CZ synthesizers. In 2022, that collection can still be found, hidden away on a mirror of a Geocities site, archived in 2002. Which led to...

My first synthesizer was a CZ-1000. I still have it, but space restrictions mean it's in storage and, instead, I'm using Arturia's CZ V virtual synth. (And also Oli Larkin's VirtualCZ, which I can thoroughly recommend.) It seemed only natural to want to bring the Temple of CZ collection to CZ V, and that's what I've done.

There's more information below, and in the installation and other documentation which comes with the download, but the tl;dr is: "Here are a lot of very useful sounds for Arturia CZ V, all collected into sensible banks and all properly named." If you just want to get on and try it out, here's the link: Temple of CZV. 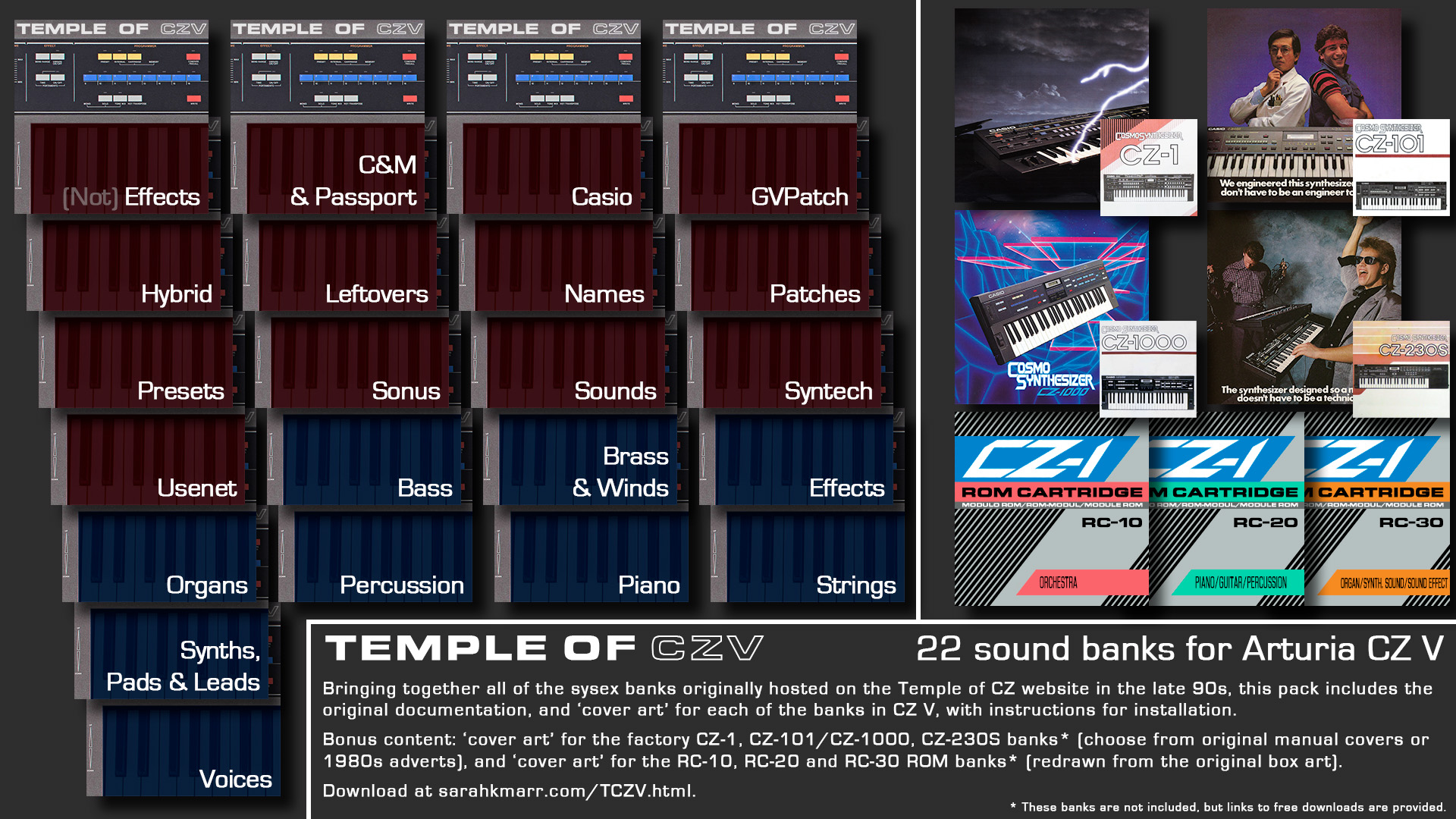 The 22 banks in TCZV each contain several of the 90s banks, all converted to CZ V presets, and all named according to the 90s documentation. Some of the TCZV banks are made from 90s banks which had a common name, but contained a variety of instrument types. The rest each cover a specific type of instrument, and are made from 90s banks which focused on those instruments. (In the 'cover art' — details below — red backgrounds are used for 'common name' banks, and blue for 'instrument' banks.)

There is some duplication of instruments, but it's less troublesome than it might be, and often it just means that a preset will be in several 'common name' TCZV banks, and an 'instrument' TCZV bank. There were a few 90s banks which were exact duplicates of other banks, and they've been removed.

The preset names in TCZV finish with '[SYSEX NAME]', where 'SYSEX NAME' is the 90s bank from which the preset originated. Rarely, a single 90s bank had multiple instruments called the same thing in the documentation: if there were two such instruments, the second has 'Too' added to its name; if more than two, a number has been added.

As a rule, each 90s bank was included in only one TCZV bank. In a few cases, however, a single 90s bank was clearly split between say, 10 string sounds and 6 brass sounds. In those cases, the 90s bank was split accordingly between TCZV banks.

The TCZV presets all have a type of 'Keys': this isn't perfect, obviously, but because they're in appropriately named banks it's easy to find different types of sounds. Also, these presets don't have velocity or effects information, but desired modulations and effects can be added quickly, and can improve what are already great sounds.

The documentation folder in the TCZV zip file includes all the information which came with the 90s banks. I've edited it to make it more suited to purpose, but I haven't removed anything, with the exception of email addresses and a telephone number, for the sake of privacy. (Although the email addresses were old enough that one of them was referenced as "arpa", so they're probably no longer working.)

Almost all of the 90s banks were imported. It's highly likely that remainder only contain duplicates of imported presets. The documentation includes a list of unimported files. In particular, the 90s banks for Casio factory and ROM presets were not imported. Oli Larkin, who created VirtualCZ and worked on CZ V, has made those available: download instructions are in the TCZV zip file, or you can just grab them now from Oli's blog.

I have created 'cover art' for all the TCZV banks, and, as a bonus, for Oli's factory and ROM banks, too. For Oli's banks, there's a choice of original manual covers or — my favourite — adverts from the 80s. For the ROM banks, I've redrawn the packaging from scratch, based on low-resolution images online. The TCZV download includes installation instructions.

And, that's it. Let me know if you enjoy it, on Twitter (@sarahkmarr) or Mastodon (@SarahKL@mastodon.social).

Back to the home page.